Now that we're nearing the end of our "early beta" period for the AI War 4.0 work, it appears that twice-daily is our new release schedule for a bit. This week is basically the last of our "big overhaul" timeframe for AI War 4.0, and then next week is going to be all about polish, polish, polish.

A few secondary things, like the updates to the last tutorials, the high scoreboards, and the achievements lists, will also not happen until next week -- but at this stage, the game is getting very close to being fully functional in terms of gameplay and the in-game HUD, menus, and interface itself.  There are still a number of gameplay changes and interface additions coming this week, of course, but the road ahead is much shorter than the road behind.

So.  This new version 3.712 is a great one, because it includes a functional multiplayer lobby for the first time since the AI War 4.0 betas have been around.  There are also some other fixes and in-game tweaks, my favorite of which is the re-implentation of the resource bar tooltips.  Those tooltips include a lot of handy information and breakdowns that are useful in any game (it's hugely useful being able to check your allies' resource flows, the current AI Progress Floor, etc). 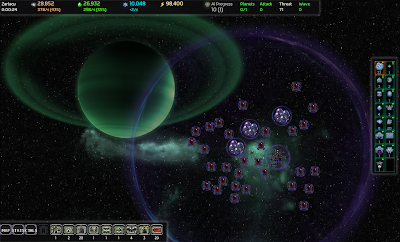 This is a standard update that you can download through the in-game updater itself, if you already have 3.701 or later. When you launch the game, you'll see the notice of the update having been found if you're connected to the Internet at the time. If you don't have 3.701 or later, you can download the installer for 3.711 here.
Posted by Christopher M. Park at 9:36 PM