This update fixes a few small things for the main game, and then includes the first of the new content for Light of the Spire!  Also, preorders are now open for Light of of the Spire (it's a full expansion, so $9.99).  Right now it's just available through the Arcen store, as is generally the case during our preorder/beta periods, but in December it should be available through all the usual suspects that carry AI War products.

The Spire are coming...
Ravaged by their recent encounters with the same AIs that pushed humanity to the brink of extinction, the Spire are an alien race that have also been all but destroyed. However, while the AIs were successful in their surprise attack against the Spire, the Spire are far more powerful than even the AIs seem to have realized. The Zenith were broken-down and ancient when humanity encountered them, but the Spire were at the height of their deadly power until quite recently.


Now the splintered remains of their race are regrouping, and entering the galaxy with a vengeance. Their attitude toward humanity, who after all spawned the AIs that harmed the Spire so, is unclear. Proceed with caution.
If you'd like to read about what features have been implemented or announced so far, please see this page on the wiki.

This Expansion Is Still In Beta!
Beta means it's not finished, and that you should expect bugs and balance issues until it gets out of beta. But we're making it available to folks early, because there's already some seriously cool stuff in here that we think you'll enjoy, and we'd also love feedback on it all. Light of the Spire will be released in the first week of December or thereabouts, so the development time schedule is very short on this one -- we're leveraging a lot of groundwork that we put in place in 4.0, as well as picking the features that go into this very carefully, in order to make this possible.

But, even so, we're obviously concerned about scope creep and want to avoid having to go back on a feature we promise. So with that in mind, we're being rather uncharacteristically secretive about the features in this expansion until they come out. Basically, the only stuff we'll talk about in concrete terms in advance are things we know we can without a doubt accomplish in this timeframe. Stay tuned over the next three weeks or so, and all will be revealed as that time passes. If you want to wait until after that period to order or preorder this one, we quite understand. We think you'll agree that this is the best expansion yet to AI War when you see it, though. Again: stay tuned! 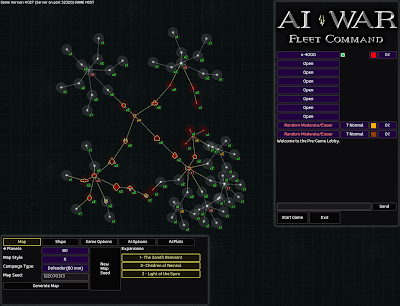 What's In This Beta Version For LotS So Far?
The exciting new Defender mode, as well as the Vanilla and Everything AI types make their debut. As a warning, Defender mode is extremely preliminary, so will probably need a lot of tweaking to be in balance. But it's pretty fun already, if you like getting beat up. ;)

Also bear in mind that we do still need to teach the AI a few new tricks for this mode. It's not used to working on a timer, it's used to thoroughly crushing you. When it's on the clock, it needs to do a better job of prioritizing your quick defeat, rather than obliterating every last trace of you.

In short, if you play with too few planets the AI will crush you; too many, on too short a time schedule, and it won't have time to crush you so you'll likely win despite the thousands of high-level ships slowly scouring you from the galaxy. We'll be working on that in future releases, but for now we suggest you use maybe 4-5 planets as perhaps a sweet spot. Or, feedback on what seems to work best (and what doesn't) is also welcome. Part of the point of the beta, after all

This is a standard update that you can download through the in-game updater itself, if you already have 4.000 or later. When you launch the game, you'll see the notice of the update having been found if you're connected to the Internet at the time. If you don't have 4.000 or later, you can download that here.
Posted by Christopher M. Park at 5:04 PM