This one is another really long set of release notes, partly because it's been several working days since we've done an AI War release -- just due to timing, other obligations, the Tidalis updates, etc.  But we've been working on AI War all throughout that time, too, which makes the list longer-ish, though not as huge as some of the recent ones. 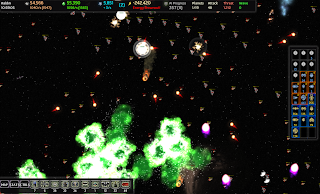 Anyway, the big thing here is the rebalance of the bonus ships, especially a lot of the Neinzul stuff but also Spire stuff and base game stuff.  Additionally, the experimental anti-bottleneck/anti-giant-fleet feature from the last version has been removed, as it just wasn't working out.  Thanks for all who tested with that and offered feedback!

This is a standard update that you can download through the in-game updater itself, if you already have 4.000 or later. When you launch the game, you'll see the notice of the update having been found if you're connected to the Internet at the time. If you don't have 4.000 or later, you can download that here.
Posted by Christopher M. Park at 11:52 AM