When in doubt, use bigger warheads. 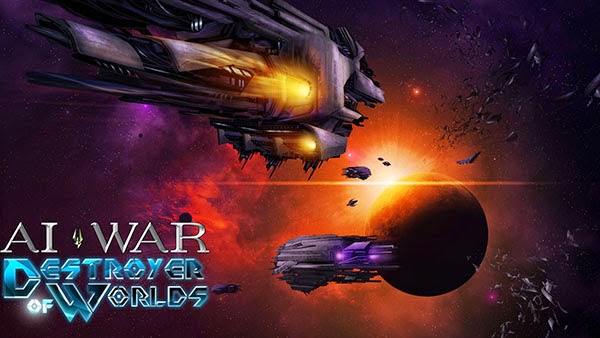 Nomad Planets introduces dynamic topology to AI War for the first time, giving the player new challenges and opportunities beyond the previously-static wormhole network. One of the Nomads also holds a secret weapon of truly dire power (that gives the expansion its title, hint hint).

The Exodian Blade is a powerful alternate way-to-win, but getting there is a multi-stage journey with a great deal of desperate fighting once things get going.

Beyond those two key features, this expansion also adds:
* 8 new AI types, from the humorous/annoying "Kite Flier" and "Cowardly" to the monomaniacal "Starship Fanatic" to the aptly named "Brutal". There's also "Mime". Never trust mimes.
* A new "Encapsulated" map style (screenshot).
* 4 new Bonus Ship Types, including the Neinzul Combat Carrier (with Beam Drones, Rail Drones, Spider Drones, and Grav Drones) and the Maw-gone-mad Powerslaver.
* 2 new AI Guardian types, including the Combat Carrier Guardian (so humans don't get to have all the ludicrous-drone fun).
* A new "Preemption" optional AI Plot that lets the AI start taking more direct action against you from the start.
* More awesome music from Pablo Vega! (that's still being worked on, but will be added for the official release)

A more in-depth look at the expansion can be found here.

AI War: Destroyer of Worlds is slated for official release in August 2014, and we'll be running a closed beta until then. If you're interested in testing and providing feedback on the expansion during the closed beta, please send me (keith.lamothe) a PM on our forums.

We'll be contacting the first wave of testers that have already signed up later this afternoon.