We had a lot of fun exhibiting at PAX East earlier this year in Boston. So much so we decided we just couldn't pass up the chance to do the same at PAX Prime next week in Seattle. So if you're attending, keep an open spot in your schedule to stop by! (Or even better, give us a heads-up ahead of time* to ensure I haven't run off to lunch.) 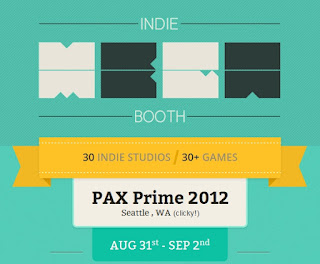 We'll be one of the 30 developers making up the incredibly amazing Indie Mega Booth (just look at all those notable developers and good games). We got to know a lot of these guys at PAX East, and we're excited to be a part of the massive collection of indie game exhibitors this time around. Specifically, I'll be located in booth #868 sharing space with the awesome folks of 24 Caret Games--developers of PS3 title Retro/Grade which just arrived this week on PSN.

As noted in the trailer below, A Valley Without Wind will be playable. There may be some new artwork stuff to showoff there as well. I'll be chatting up the Ancient Shadows expansion with those who want to talk about it, but I doubt anyone would get much out of a short floor demo for a game like AI War. We're also planning some giveaways of our titles both on-sight and online; plus we may have something else to debut. Not sure yet, we'll see.

On top of that, I'll be heading up the 'Open Development for Indies: Why Cooperative Trumps Competitive' panel with a handful of other indie devs in the Serpent Theater, 3:00 PM on Sunday (September 2nd). If you're interested in indie development at all, or if you just want to say hi, make sure not to miss us in the afternoon during the final day of the conference.

If you want updates on what we and all the other devs in the mega booth are up to, or if you just want to support us all in general, the Indie Mega Booth Facebook and Twitter stuff is a go.

VG247 -- A Valley Without Wind 50% off on Steam, headed for graphical overhaul

Co-Optimus -- A Valley Without Wind On Sale at 50% Off

DealSpwn -- A Valley Without Wind Getting Massive Art Overhaul

TheBitBag -- A Valley Without Wind 50% off on Steam, major graphic overhaul incoming

GameZone -- A Valley Without Wind getting graphical redesign

HardReset -- A Valley Without Wind Review

*That goes for both press and attendees. If you happen to be media and are interested in our Indie Mega Booth press kit, head here.
Posted by Erik Johnson at 8:44 AM